Hanging from the World Tree

I was fortunate to spend last weekend with the Wings of Desire crew from Oslo. Before going any further, let me caution you that if you read on you will see photos of someone suspended from hooks through their skin. These activities are undertaken under strict protocols by professionals licensed by Norwegian health authorities. Obviously nothing like this should be done without such health and safety arrangements.

With that warning made, I can safely provide a link to the Wings of Desire website! Let me start by saying that my commentary is that of a novice: this was my first time suspending. Besides my immediate attraction to it, which is beyond explaining,* I was also curious about its spiritual and mental-health dimensions. Hanging yourself from hooks without anesthetic can open up all sorts of embodied feelings. In fact Håvve has collaborated with a psychiatrist who treats self-harm. But it’s important to note that people suspend for all sorts of reasons, and it’s no more intrinsically therapeutic than automatically indicative of bad mental health!

This is why it’s important that Håvve, Alan, and their apprentice Dominik are such experienced and sensitive professionals. They know how to create an environment that embraces you, opens you up, and makes it safe to let yourself go. (I didn’t get to meet June, the third team member.)

Håvve writes that “All of us who hang from hooks, whether we know each other personally or not, have a belonging in something which is ‘ours.'” It’s probably because my Norwegian is rudimentary, but to me his expression “å ikke møte smerte alene” is poetic and moving: we go to meet pain, voluntarily, in loving company.

Everyone in the suspension community knows that one of its inspirations is the O-kee-pa ritual once performed by the Mandan tribe in modern-day North Dakota. I’ve heard surprisingly few people connect it with Nordic paganism, starting with Odin hanging himself on the World Tree for nine days, pierced by a spear, “offered to Odin, myself to myself,” until he received the runes (Hávamál 139). Scholars connect this with depictions of men hanging in trees at Storra Hammars at Larbrö in Gotland (ca. 800 CE) and in one of the Oseberg tapestries (ca. 830 CE), as well as with Adam of Brennan’s description of hanging offerings around the temple at Uppsala (which he had never personally visited, ca. 1070 CE). Perhaps this is downplayed because white supremacists have tarnished “Odinism,” although Bifrost, the main Ásatrú organization in Norway, looks enlightened and inclusive. In any event, I decided to implant this story about Odin in my imagination. I also decided to think about initiation rituals for Artemis, in which young boys and girls “die” for the goddess — sometimes with a lot of pain and bleeding, as in the Spartan celebration of Artemis Orthia. It hardly needs to be pointed out that this ritual “death” is merely symbolic, and prepares the way for a “rebirth.”

In the days leading up to the event, I read texts and enacted rituals to fix these associations in my psyche.  But on the day itself, as Alan advised, I tried to take it as it came! The suspension went on from about noon till about seven. I suspended first, and my experience lasted about an hour. I enjoyed having the hooks put in, and was feeling exhilarated for a few minutes: “like a god.” This didn’t last.

Shortly after that I went into a bit of shock, and spent about 10 minutes leaning on Alan. After recovering I spent about 15 minutes pulling myself off the ground with a pulley, only to feel awful again and come back down. With a lot of loving care  and plenty of sugary drinks and cookies I got back up, and stayed there for about half an hour without further problems.

I wish I could say that I had ecstatic visions, but I have mild aphantasia, so my mind’s eye is pretty much blind. This is something psychotherapists and ritualists need to be more aware of: the so-called “power of images” varies from person to person. What I liked about suspension was the way it affected and continues to affect my body.

By coincidence, I had a student in my office today theorizing about how people’s bodies, unlike ideologies, are individual. No, I was thinking, that’s not quite right. Our loved ones live in our bodies, just as they do in our personality traits. Ever look in the mirror and see one of your parents in the lines of your face? Ever realize that one of your expressions, one of your hand gestures, or the way you tell a joke actually belongs to a friend or lover or mentor from your past? I’ve been thinking about that as I feel this soreness in my back. Who or what is with me in my body now?

Part of the answer is obvious: the people who suspended with me and cared for me are connected to me through this lingering soreness, as they will remain with me in the pinprick scars. But partly it’s spiritual, because even if Odin and Artemis are just idealities sustained by traditions, those idealities have a kind of being. That being doesn’t depend on any beliefs you can articulate about them. In a similar way, the memories of the body can’t be fully captured in words. That’s why you can have a different kind of conversation with spirits through pain and gravity than through reading or speaking.

They say that most people who suspend once return again and again. I can see the temptation, so I’m glad I won’t have the opportunity very often. 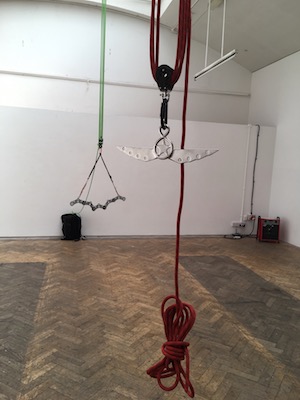 It was a special day, and I look forward to dwelling on it for a few months.

I took the references to hanging in Nordic religion from Anders Andrén (2014), Tracing Old Norse Cosmology: The World Tree, Middle Earth, and the Sun in Archaeological Perspectives, Lund: Nordic Academic Press. In this article P. Bonnechere surveys and rejects arguments intended to show that the rites of Artemis Orthia originally involved human sacrifice.

I’m cognizant that all the people in my photographs are men. It’s worth noting that the suspension community isn’t macho or masculinist. My wife, a long-time suspender, has written about this same event here.

*I say a person’s attraction to (or repulsion by) body suspension is “beneath explanation” only the sense that, whenever we try to decide how to make our lives worth living, there’s no point deliberating about some things: we are the people we have become. However there are all kinds of explanations for how we become those people, and when our patterns of thought and feeling become problems for us or other people, then of course we need to work on this — for instance, in therapy.